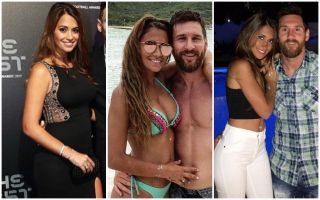 Argentina face a crunch showdown with Nigeria at the 2018 World Cup on Tuesday night, and Lionel Messi will have the weight of the nation on his shoulders.

It’s been a miserable tournament thus far for the Barcelona superstar, as his missed penalty in the opening game against Iceland was followed by his side’s capitulation against Croatia in a 3-0 defeat.

That now leaves them in need of a win over Nigeria to advance to the last 16 stage, and having Messi in form and at the top of his game will be crucial to their chances.

The fact that his wife, Antonella Roccuzzo, hasn’t been in Russia to this point has raised eyebrows, but she is reportedly set to be at the game on Tuesday and has explained why she hadn’t flown out sooner to support her husband.

“I did not go because I have very young children and because it was scheduled like this,” she is quoted as saying by The Mirror. “Moreover, I want to enjoy some time with my family who I am not going to see until December.”

Whether or not having his better half with him in Russia helps remains to be seen, but Messi knows that neither he nor his teammates can afford another lacklustre and poor display or they could be heading out of the World Cup much sooner than expected.