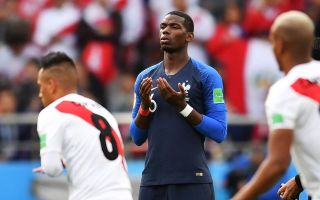 France, already qualified for the last 16 from Group C, but face a tricky encounter against Denmark shortly.

However, finishing in top spot will have benefits too as Les Bleus look to avoid Croatia who top Group D and have impressed in their opening games, most notably against Argentina where Luka Modric and Ivan Rakitic starred.

A draw for France would be enough for them to win the group and they could potentially face Nigeria or Argentina in the last 16 – which is still a tricky prospect.

France manager Didier Deschamps has chosen to rest Paul Pogba and Blaise Matuidi, who were booked in the opening games.

However, he has started new Atletico Madrid man, Thomas Lemar, who will support Ousmane Dembele, Olivier Giroud and Antoine Griezmann.

Steven N’Zonzi also starts for the French as does goalkeeper Steve Mandanda, who replaces captain Hugo Lloris in the starting XI.

Martin Braithwaite will replace forward Yussuf Poulsen, who is suspended, but Christian Eriksen keeps his place and will be looking to inspire his side once more.

Official: Ousmane Dembélé starts for France in their final Group B game vs Denmark. Samuel Umtiti is rested. Kick off in around 70 minutes. pic.twitter.com/hqDgOTajmR