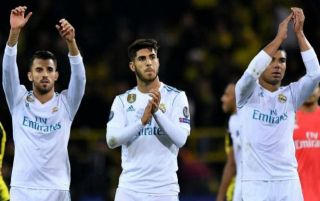 Marco Asensio won’t rule out a Liverpool transfer as he responded to rumours linking him with a big-money bid from the Reds.

It was sensationally claimed by Mundo Deportivo that LFC had made an offer of £158million for the transfer of Asensio this summer, and he didn’t exactly commit his future to his current club Real Madrid when asked about the story.

Asensio would be a great signing for Liverpool in attacking midfield, with Jurgen Klopp yet to truly bring in a replacement for Philippe Coutinho after his January departure to Barcelona.

Given that the Spain international, currently at the World Cup with his country, has not always been a regular for Real, it’s not beyond the realms of possibility that he might be tempted to try his luck with a move away from the Bernabeu.

Asensio seems an ideal fit for Liverpool’s style of play after showing his immense potential for both Madrid and the Spanish national team in recent times, and at 22 he will surely only get better.

This weekend Marco Asensio was linked with a move to Liverpool.

Today when asked about the link Marco replied with “Liverpool? When the World Cup is over, we’ll talk about that sort of thing”

As unlikely as this move is. The fact he didn’t flat out reject means I’ll be hoping. pic.twitter.com/qEXDDlzCas

It would have been easy for him to say ‘no’, and fans may have reason for optimism that he’ll review his situation, perhaps depending on Madrid’s transfer activity as any new attacking signings would likely further block his progress in the first-team.

Liverpool, however, clearly have room for another attacking midfielder after the Liverpool Echo detailed how their move for Lyon’s Nabil Fekir broke down, with Asensio certainly a fine alternative.