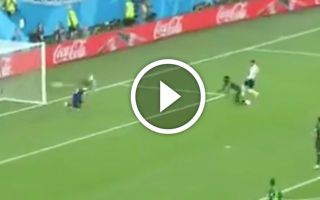 Argentina needed to beat Nigeria to have any chance of going through to the last-16 of the World Cup, and Lionel Messi answered the call.

The Albiceleste had it all to do on Tuesday night, as after being held by Iceland and defeated by Croatia, they had endured a miserable start to their tournament in Russia.

In turn, they needed to beat the Super Eagles and hope that Iceland don’t match their result, and so it was absolutely vital for Jorge Sampaoli’s side that they made a positive start.

With that in mind, they were handed the perfect start by Messi as he took a brilliant first touch to control Ever Banega’s pass into his path before producing a superb finish to break the deadlock with a simply incredible goal considering the circumstances.

The Barcelona superstar is no stranger to delivering in big moments, and when Argentina desperately needed him, he delivered.

It’s been a difficult World Cup for Messi to this point though, as he missed a penalty in that draw with Iceland while he was anonymous for large periods against Croatia. However, he finally made his mark with a stunning impact against Nigeria.

Building on that though, Argentina will now be hoping that he can inspire them into the knockout stages as runners-up in Group D.