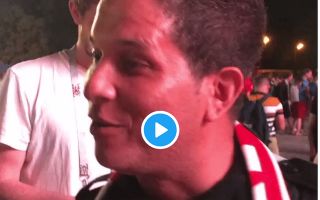 England striker Harry Kane has made a brilliant start to the 2018 World Cup in Russia, and it seems as though he’s making plenty of new fans.

The 24-year-old is currently topping the goalscoring charts at the tournament after bagging five goals in his first two games, with the Tottenham ace potentially starting against Belgium on Thursday in a bid to add to his tally.

His goals will be crucial to England’s run in the World Cup, and his exploits have seemingly impressed this Panama supporter who is tipping him for big things moving forward.

With Cristiano Ronaldo and Lionel Messi on the wrong side of 30, he believes that the England forward could be the next big superstar to fill that void, while also throwing in a hilarious and expletive-ridden description of him when speaking to CaughtOffside’s very own Robert Summerscales and Jordan Chamberlain on the ground in Russia.

Kane has already scored 140 goals in 213 games for Spurs, hitting 40+ goals for the first time in a single campaign in his career last season.

In turn, it seems as though this Panamanian could very well be right with his prediction, but the more immediate focus for Kane will be on the World Cup and leading the line for England.

As noted by The Guardian, he is being tipped to start against Belgium with top spot in Group G up for grabs, and he’ll certainly be hoping that he can continue his goalscoring form and maintain his momentum heading into the knockout stages.