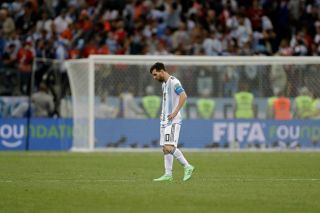 Argentina and Barcelona star Lionel Messi will have to wake up to a painted picture of Real Madrid and Portugal forward Cristiano Ronaldo in his new World Cup hotel.

While many will argue that the perfectly sculpted figure of the god-like Cristiano Ronaldo is something that so many dream of waking up to, we can’t imagine Lionel Messi is all too happy about this.

Reports this evening have suggested that Argentina’s new Russian hotel for the World Cup knockout stages will feature a gigantic painted picture of Cristiano Ronaldo. Which subsequently means that Lionel Messi and his teammates will have to look into the shining eyes of CR7 every morning before breakfast.

Like some weird failing marriage, Lionel Messi will have to roll over every morning to glance his arch-nemesis, and perhaps the bane of his life, in the eye every single morning.

The Ronaldo vs Messi debate is one that bores us all, but it is one we cannot ignore.

Argentina narrowly advanced through the knockout stages of the World Cup after a 2-1 win over Nigeria on Tuesday thanks to goals from both Lionel Messi and Manchester United’s Marcos Rojo. Perhaps if Argentina do beat France in the next round to progress through to the quarter-finals, their hotel planning might just go a little better next time.