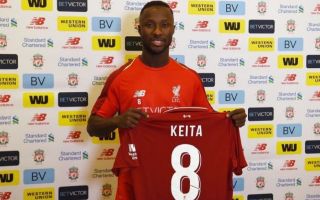 Liverpool’s new signing Naby Keita has explained how he sees his role in the team next season, according to Sky Sports.

The new No.8 inherited Steven Gerrard’s legendary number, however, it seems the Guinea star will be replicating a similar role to that of his predecessor in the latter stages of his career – dictating play from a deep position.

READ MORE: Who could England face in the World Cup 2018 last 16 and beyond?

As per Sky Sports, the new £52.75m said that he will be prioritising his defensive responsibilities first, despite manager Jurgen Klopp saying he could play in a more advanced role too.

Speaking to LFC TV, as reported by Sky Sports, he said: “Firstly I am somebody that plays in a defensive role and we need to start with that, but then I need to bring the ball forward and help the attack.

Liverpool fans will be in for a treat next season as he is the perfect all-action midfielder.

Keita is skillful, intelligent footballer with an eye for goal from midfield.

He also has the strength and playmaking ability to be a perfect replacement for Emre Can who has moved to Juventus and hopes to take Liverpool to the next level next season.

“When you see how they performed last season it makes me want to do the same and to be a part of this team,” he added, in Sky’s report.

“I would like to be able to achieve a similar kind of season with them next season – but even better.”