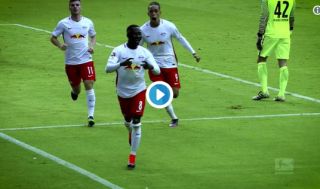 Naby Keita has been unveiled by Liverpool today and there’s a superb video doing the rounds of his best goals and highlights from his time with RB Leipzig.

The Guinea international has taken Steven Gerrard’s old number 8 shirt upon arriving at Anfield and it’s clear he’s a similar style of player from these clips below.

In fact, Keita arguably looks like even more of an all-rounder, bringing silky skills and fancy footwork to the party as well.

Most Gerrard-like, however, is his brilliant ability moving box to box and his shooting from long range.

Reds fans are going to enjoy watching this guy next season!

Liverpool have today confirmed the arrival of midfielder Naby Keita from RB Leipzig ??

And he's got an eye for a long-range banger too ?