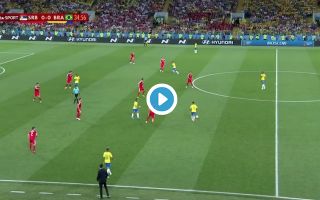 Barcelona stars Paulinho and Philippe Coutinho linked up perfectly to give Brazil the lead vs Serbia in the final round of fixtures in Group E of the World Cup.

It took Brazil 36 minutes to break the deadlock against European side Serbia, but they did it in some style.

Paulinho had made his initial run from a deep midfield position and the Brazilian star showed perfect composure to lift the ball over Serbia goalkeeper Vladimir Stojkovic.

The goal showed a superb understanding between the Barcelona stars and Coutinho and Paulinho’s experience playing together at club level at the Camp Nou undoubtedly prompted the beautiful piece of link-up play.

A good result from the South American giants was even more imperative with Switzerland taking an early lead over Costa Rica in the other fixture in Group E.

Brazil will have also had an early warning to leave any complacency off of the pitch after watching World Cup holders Germany be knocked out of the Group Stage of the tournament for the first time since 1938 today after falling to a 2-1 defeat to South Korea.

GOAL! Coutinho chips a measured pass forward, Paulinho doesn’t have to break stride and just lifts the ball over the onrushing keeper pic.twitter.com/KbfUXDHRa7