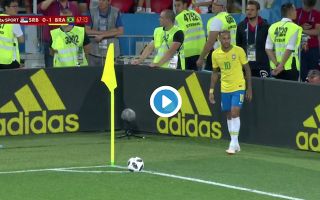 Paulinho had initially given Brazil the lead in the first-half with the Brazilian midfielder producing a composed finish to poke the South American giants ahead.

The club connections continued into the second half with Thiago Silva linking up with his PSG teammate Neymar.

Neymar found Silva with a corner as the Brazilian centre-back made a superb run across the front post to nod home for Brazil’s second.

Thiago Silva has had to fight for his place in Brazil’s World Cup squad having had his captaincy stripped four years perviously in the last World Cup.

Silva had asked to go last during a penalty shootout with Chile in the last World Cup and was seen in tears prior to the shootout which many believe was the reason that he subsequently had his captaincy taken away.

You can watch the fantastic Thiago Silva goal below after a pinpoint delivery from Neymar.

GOAL! Neymar’s whipped in corner finds the run of Thiago Silva at the near post who powers in a header pic.twitter.com/HGwrXgtv0D