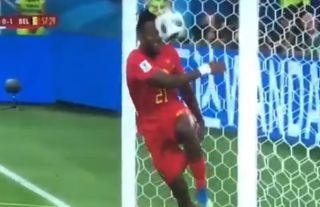 Chelsea striker Michy Batshuayi took to Twitter after his hilarious moment for Belgium against England in their World Cup win tonight.

Attempting to celebrate Adnan Januzaj’s goal by smacking the ball into the back of the net from close range, Batshuayi instead ended up hitting the post so the ball ended up right back in his face.

At least the Blues ace saw the funny side as he tweeted a video of the viral moment, and admitted his mentions were going nuts, which is hardly surprising.

Still, he shouldn’t feel too silly as he’s provided us with one of the funniest moments of the World Cup so far, showing again that he’s one of the games best characters.

He even joked that this was his attempt to invent a new Fortnite celebration, so let’s see if it catches on…

Fortnite celebrations so overrated bro I had to create something new ???? … ??? #KarmaIsAB pic.twitter.com/cgbEW8RX4p

Januzaj’s winner saw Belgium beat England 1-0 and win their group, with Gareth Southgate’s side now due to play Colombia in the next round.