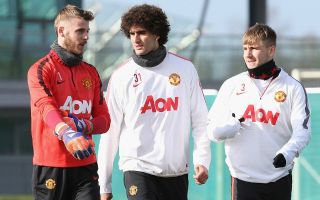 Marouane Fellaini’s entourage reportedly held a meeting with Arsenal chief Sven Mislintat over a potential transfer to the Emirates Stadium before deciding to stay at Manchester United.

The Belgium international could seemingly not be persuaded to join the Gunners as it now looks like he’s told those close to him he’s set to sign a new two-year deal at Old Trafford, according to the Times.

Still, it seems Arsenal’s interest in Fellaini was serious and got to a reasonably advanced stage if the player’s reps actually met with Mislintat to discuss a move.

The Times also list AC Milan, Paris Saint-Germain and Galatasaray as being among his suitors, though Jose Mourinho rates him highly and will be glad to have kept hold of him.

This goes against what many United fans feel as the 30-year-old hasn’t exactly set the world alight during his five years with the Red Devils.

Largely a squad player, Fellaini is at best a useful option from the bench but not exactly the kind of player United fans will feel their club should be building around or making such a fuss over keeping.

Especially as James Robson of the Manchester Evening News now claims the Fellaini deal means United will stop them looking to sign another central midfielder this summer – something that is surely needed.

Fellaini deal is likely to end United's search for a second midfielder this summer.
Mourinho went into the window with a number of areas in need of address. Makes it easier to stretch his budget