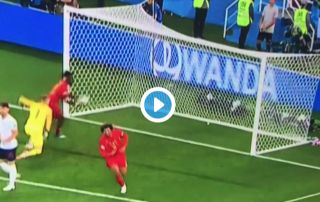 Chelsea and Belgium forward Michy Batshuayi embarrassed himself after the Red Devils took the lead against England, with the striker hitting himself in the face with the ball following Adnan Januzaj’s strike.

The former Marseille man, who replaced Romelu Lukaku up front for Roberto Martinez’s side this evening, produced a moment of hilarity after his side took the lead against the Three Lions.

The Red Devils now sit top of group G through their goal, meaning that they are set to face Japan in the next round with Gareth Southgate’s side set to take on Colombia should the score remain the same.

We’re sure for you Chelsea fans that this isn’t the first time you’ve seen Batshuayi embarrass himself on a football pitch, and it may not be the last either!

Best bit of that goal? Batshuyi hitting himself in the face off the post. #worldcup pic.twitter.com/64AV7rqLOS