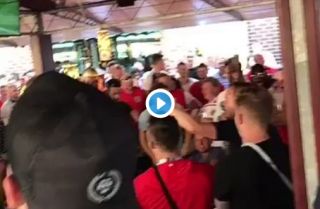 ‘If you’re watching on the telly, you’re a c**t’ is the message from England fans out in Russia for this summer’s World Cup.

It’s fair to say Three Lions supporters are in rowdy mood today as we prepare to take on Belgium in our final group game.

CaughtOffside have been out in Russia to follow the games and follow England fans and their antics, and it seems they’re not too happy with those of you who haven’t bothered to make the journey.

Then again, this might also serve as a message to the German national team, who are now out of the competition after yesterday’s shock defeat to South Korea.

To those back home… ? pic.twitter.com/sa9XccezIc