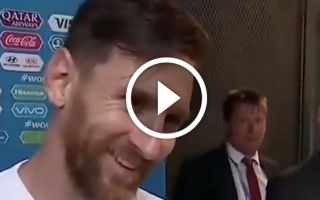 After playing a fundamental role in rescuing Argentina’s World Cup hopes this week, Lionel Messi has proven he is an absolute legend off the pitch too.

The Albiceleste were facing elimination against Nigeria in their crunch clash on Tuesday night, but goals from Messi and Marcos Rojo defeated the Super Eagles and sent Argentina through.

They will now face France in the last-16 in Russia on Saturday, and Messi will undoubtedly be looked to for inspiration to now kick Argentina into gear and show real signs of improvement moving forward.

However, he made this reporter’s tournament it seems as after receiving a red ribbon from his mother to give to Messi, he gave the gift to the 31-year-old after the opening Iceland game which ended in a draw.

Whether or not Messi wore it during the Croatia defeat is unclear as it didn’t bring him much luck in the 3-0 loss which left them in a very precarious position, but when the same reporter asked him about the ribbon after the Nigeria win, Messi lowered his sock to reveal that he was wearing it and had worn it during the game.

Naturally, the reporter was stunned and delighted at the same time, and it was undoubtedly an incredible gesture from Messi to bring him and his mother genuine joy. Having worked against Nigeria, perhaps Messi will continue to wear it against France next time out too…

God I love Messi so much, he’s the best ever, I can’t believe how good he is. pic.twitter.com/f2nzpGRSGd