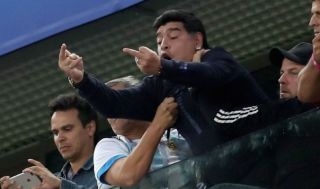 The 2018 World Cup has already delivered memories for a lifetime and we’ve only just exited the group stages.

From Cristiano Ronaldo magic to Diego Maradona’s very own magic (if you know what we mean) to VAR and beyond, it’s been a thrilling two weeks.

With the knockout stages now just hours away and with a Portugal vs Uruguay 0-0 played out between two specialists in sh*thousery feeling almost inevitable, it’s time to take a look at the five most glorious moments from what has been a beautiful two weeks in Russia.

Majestic, flamboyant, spectacular. Just imagine, you’re up against it – desperate for a goal. You’ve sent the big man over to lob a Rory Delap throw-in into the box. You await what is perhaps the most significant and important delivery your country has ever anticipated. He attempts to do a front-flip. An actual real life somersault. Like, a real one. A proper Robert Earnshaw and Miroslav Klose somersault. And he fails. He gets half-way through and then thinks “actually, lads – fu*k it, can’t be arsed.” Iconic. Give him a knighthood.

if u missed the iran player trying to do a front flip on a throw in you basically missed the best part of the world cup pic.twitter.com/NU1nIPZN4m

What’s that? You think Lionel Messi’s perfect two touch control against Nigeria should be in this top five? Couldn’t care less, mate. Diego Maradona in the stands has done more for this sport in two weeks than Lionel Messi has achieved in two decades. Possessed? Maybe. Offensive? Perhaps. A Liability? Probably. Having a great time? Certainly.

Diego Maradona has smoked a cigar inside a stadium that you’re specifically not allowed to smoke in, shown the middle finger to opposing fans and has suffered from what must be terrible hayfever. Lots of eye-rubbing, lots of sniffing. Pollen must be bad in Russia this time of the year.

The only person who has achieved more at a World Cup is Diego Maradona himself. Diego over Pele, every day of the week.

What? Maradona give middle finger then… pic.twitter.com/IqWsJsK7oD

Diego Maradona reacting to a chance with a cigar in his hand? pic.twitter.com/Gx1OmmS1pg

Big bald Nordin Amrabat of Watford, what’s he doing in this top five? He deserves every spot, in my opinion.

Channeling his very own Wayne “it’s nice to see your own fans booing you” Rooney of 2010, Nordin Amrabat took his three seconds of camera time extremely well.

Following a draw to Spain the Moroccan international mirrored every single British Dad this summer. “VAR is bullsh*t” – no explanation, just bulls*t. That’s what happens when the robots get involved with the workingman’s game, it’s carnage. Hook it to my veins.

Have you ever been 7-0 down in a game of not so friendly five-a-side? You’ve been shunted in goal. But you shouldn’t be there. Someone needs to take this game by the scruff of neck. You’ll go on a mazy run. You get tackled, the other team score. You’re embarrassed, flat on your arse.

This is essentially what Manuel Neuer did. But at the World Cup. Like, the actual World Cup. Playing for actual real-life World Cup winning Germany. Billions watching all over the world and one of the greatest goalkeepers of all-time literally morphed into a frustrated, divorced estate agent on a Tuesday evening in Stratford.

Arguably the greatest part has to be the commentators warning us “he’s actually a very handy midfield player” just before he came out. Well he’s f*cking not, Jonathan. He’s sh*t.

Proper mint, isn’t it? Watching one of the greatest players of all time just completely lose his head. Rattled. Love it.

enjoy south korea’s second goal against germany but with the titanic song playing in the background pic.twitter.com/oxtZ1UMho3

Fu*king class, this. Sat on the edge of your sofa. He’s not gonna, is he? And then, he does.