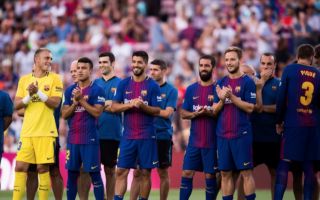 After being limited to a bit-part role last season, Barcelona are reportedly willing to drop their demands for goalkeeper Jasper Cillessen this summer.

The 29-year-old made just 11 appearances last year, with nine of those coming in the Copa del Rey success as he was forced to play second fiddle to Marc-Andre ter Stegen.

Having previously been a permanent fixture for club and country while with Ajax, it’s not an ideal situation for the Dutchman and so his lack of playing time makes a potential exit from Barcelona unsurprising.

Interestingly though, it appears as though a deal could be made more realistic as Sport claim that Barca are willing to drop their demands for Cillessen from €60m, as per his release clause, to €30m, with Liverpool and Chelsea both specifically mentioned in the report.

Out of the two Premier League sides, Liverpool are arguably most in need of a new goalkeeper given Loris Karius endured a horror show in the Champions League final against Real Madrid last month, leading to fresh question marks over his reliability between the posts for the Reds.

Thibaut Courtois remains at Chelsea and will continue to be their first choice, but the Blues are mentioned as a club potentially in need of addressing their goalkeeping situation by Sport.

Given his experience at the highest level, Cillessen would arguably be a smart signing for any side, and given he’s still only 29, he has plenty of years ahead of him.

Now though, it remains to be seen if any interested parties are willing to match Barcelona’s new reported demands for their back-up goalkeeper, while the Catalan giants could then be forced into action themselves to find a reliable new No.2 behind Ter Stegen.