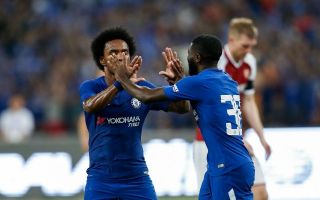 Chelsea are no strangers to loan agreements, with a string of their youngsters all currently away from Stamford Bridge in temporary deals.

Whether or not they return to make an impact for the Blues remains to be seen, as competition is undoubtedly fierce in the first-team with plenty of experience and quality at the manager’s disposal.

SEE MORE: Chelsea make significant progress on transfer of Serie A star after improving their offer

In turn, The Daily Mail report that youngster Jeremie Boga could be set for another loan spell, with the report claiming that he’s in talks over a switch to Sassuolo.

It’s easy to see why a loan exit makes sense for the 21-year-old, as he was limited to a solitary outing for Chelsea last season before being shipped out to Birmingham City on loan.

With the midfield packed with top options, it’s difficult to see the situation changing for him next year, and so perhaps for his own development and to gain experience by playing regularly, another exit is the right move for his career.

Further, by spending a year in Italy with Sassuolo, it will likely help improve his tactical game as well as allow him to potentially play heavy minutes.

After losing coach Eusebio Di Francesco to Roma, the Neroverdi suffered a dip last season which saw them finish in 11th place in Serie A, just eight points above the relegation zone.

With that in mind, they’ll be looking to improve the squad any way they can, and Boga could seemingly now arrive to bolster their options in midfield as he looks to continue to make an impression out on loan to convince Chelsea that he has a long-term future in west London.