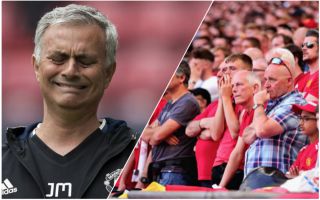 Man United have announced that Marouane Fellaini has signed a new deal with the Red Devils today, news that has not gone down well with their fans at all.

As per the club’s official website, the Belgian international has signed a new deal with the club, keeping him there until at least the year 2020.

Fellaini has often been seen as a favourite of United manager Jose Mourinho during the Portuguese coach’s time at Old Trafford, however this has not stopped fans from taking a disliking to the Belgium these past few years.

Following the club’s announcement on Twitter, fans took to the social media site to call for the club to get rid of Mourinho, with some clearly furious about the decision to extend Fellaini’s stay at the club.

Here are a few tweets from fans calling for the former Chelsea boss to be sacked following the club’s decision to award Fellaini with a new contract.

We can’t support more Mourinho!! We are done with Fellaini! Jose must go out!

What Journey? You & Mourinho sum up all that is wrong at our club! I pray to God that you both get chased out Out!! AMEEN

Fuck off fuck off. I'm sick and tired of this shit. Mourinho get the fuck out of our club you absolute nonce. Ruining our heritage. Sickening decision to extend fellaini. Fred is not united quality and guarantee Bale or Milinkovic savic won't sign. #MourinhoOut

This is exactly why MOURINHO has to go….

Mourinho Out. Wrong one. Not so Special.

BRING THE BANNERS OUT #MOURINHOOUT

I hope this is Mourinho's final season as well. I hope he is sacked before the season runs out. Any manager begging Fellaini to stay is not a manager I can respect.