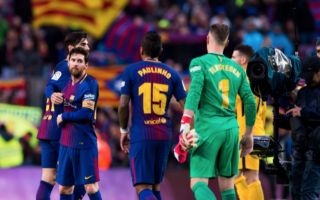 Liverpool are reportedly interested in signing Barcelona and Germany star Marc Andre Ter Stegen this summer, a player who would solve the Reds’ goalkeeping dilemma should he sign.

Don Balon are stating that Jurgen Klopp’s side are interested in signing the former Borussia Monchengladbach, and that the player isn’t too keen on securing a move away from the Camp Nou.

Signing Ter Stegen would give Liverpool a massive boost in quality in their goalkeeping area, a part of their squad that needs the most attention this summer transfer window.

Liverpool are keen to bring Ter Stegen to Anfield this summer

Jurgen Klopp has constantly changed between goalkeepers Loris Karius and Simon Mignolet this past season, with neither of them managing to impress enough to cement a solid first team place for the Reds.

The Merseyside-based club have not had a truly class ‘keeper since the days of Spaniard Pepe Reina, however should they sign Ter Stegen, they would have one of the world’s best shot-stoppers on their hands.

The German international has been absolutely fantastic for Barcelona since becoming their first team ‘keeper at the start of the 2016/17 season, something that should’ve seen him be Germany first choice ‘keeper at the World Cup ahead of Manuel Neuer.

If Ter Stegen does move to Anfield, it’ll give the quality in their squad a huge upgrade and would be a signing that should propel them closer to securing their first ever Premier League title.