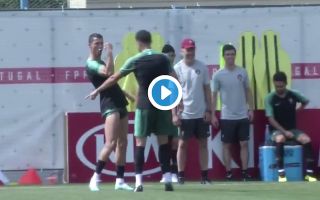 MORE: Some Cristiano Ronaldo fans love the moment Drake references the Real Madrid star but not Messi in new album and believe it proves one thing

Real Madrid star Cristiano Ronaldo scored a near impossible goal during Portugal’s World Cup training and celebrated with glee when his teammates failed to recreate it.

The 2018 World Cup has already been a tournament to remember for Real Madrid’s talisman and it would appear that he is enjoying life off of the playing pitch just as much as on it.

Footage has emerged this afternoon of Portugal preparing for Saturday’s knockout match with Uruguay and Ronaldo can be seen feeling little pressure as he joked around with his teammates.

The Real Madrid star executed a perfect attempt at goal from behind the actual goal in which he was able to bend the ball to knock another ball over the line.

The spectacular antics did not end there as the Real star invited his teammates to recreate the magic from a similar impossible angle.

The likes of Pepe tried to recreate Ronaldo’s effort but could do little to match their international captain.

Ronaldo then celebrated in glee at his teammate’s inferiority. We can’t imagine that CR7 will be too happy on Saturday if his fellow Portugal stars are so far behind his performance levels.

You can watch the Ronaldo magic below.