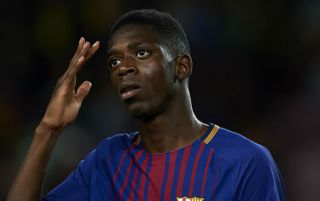 Barcelona are considering a swoop for Chelsea and Brazil player Willian to provide competition and be back-up to current star and wonder-kid Ousmane Dembele.

This is according to Don Balon, who are stating that the Spanish giants are eyeing up Willian for a move to the Camp Nou, and that they are reportedly weighing up a €50M swoop for the player.

The news outlet are also stating that the Blaugrana view Willian as a player who will provide back-up for Dembele, and the Frenchman still isn’t completely decided as to whether he is staying at the Nou Camp this summer or not.

Dembele has yet to full-fill his potential at Barca since his move from Borussia Dortmund last summer, something that is mainly down the injury the winger received early on in the season.

The Frenchman was out for a fair few months due to an injury the player picked up in September, however the youngster was still manage to impress fans with his displays towards the end of the season.

Willian was one of Chelsea’s most consistent performs this season, and would definitely provide solid and reliable for back-up for Dembele should he move to Barca this summer.