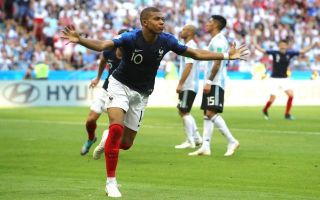 France and Argentina produced a thrilling encounter in Kazan on Saturday, but it was Didier Deschamps and his men who prevailed 4-3 to advance to the quarter-finals of the 2018 World Cup.

Antoine Griezmann kept his cool from the penalty spot to open the scoring early on, but a stunning Angel Di Maria strike and Gabriel Mercado’s goal turned the game on its head.

However, France then launched their own fightback as goals from Benjamin Pavard and a double from Kylian Mbappe swung the game back in their favour with a late Sergio Aguero goal not enough for Argentina to avoid a disappointing exit from the World Cup.

Mbappe unsurprisingly takes our Man of the Match award as his pace, movement and clinical finishing proved to be decisive against Argentina’s vulnerable backline, while Paul Pogba deserves credit for putting in a dominant performance in midfield to add creativity and solidity in the team.

Blaise Matuidi impressed but will miss the next game due to suspension which will be a huge blow for France, while Griezmann put in an important shift for his side too.

In contrast, it was a game to forget for most of the Argentina players. Although he can’t be solely blamed for their exit, Lionel Messi failed to have the required influence on the game and more was needed from their talisman despite the struggles around him.

He did force Mercado’s goal as it was his shot that was diverted into the back of the net while he had the late assist for Aguero’s goal, but the Barcelona superstar won’t be happy with his own contribution as he was limited to just one goal in the tournament.

Marcos Rojo looked clumsy for the penalty and open to danger throughout and so is marked down, although Di Maria deserves some credit as aside from his goal, he put in a tireless performance.

However, it wasn’t enough for Argentina as they’re now forced to analyse their tournament on their way home, while France march on and will hope that after failing to entirely convince in the group stage, they’ve now started to click into gear at just the right time with the knockout stage now underway.