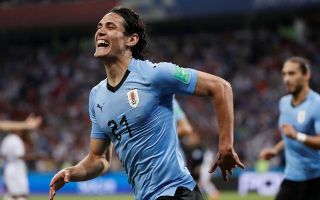 Uruguay secured a 2-1 win over Portugal on Saturday night in their World Cup last-16 clash, as Edinson Cavani emerged as the hero for his side.

Oscar Tabarez’s men wasted little time finding a breakthrough as Cavani headed home a delightful delivery from Luis Suarez after an excellent one-two between the pair.

Given Uruguay hadn’t conceded in 2018, the last thing Portugal needed was to fall behind, but to their credit they hit back after the break with Pepe heading home from a corner.

That seemed to give the Portuguese fresh optimism as they picked up the tempo and started to threaten, but just as they seemed to be on the front foot, Cavani struck again with a brilliant first-time curling effort that evaded Rui Patricio and nestled into the back of the net.

In turn, it’s no surprise that the Paris Saint-Germain forward gets our Man of the Match award, as his double was crucial for Uruguay to prevail and advance to the quarter-finals, although they’ll now be sweating on his fitness after he was forced to limp off shortly after his second goal.

Elsewhere, Luis Suarez put in a tireless performance to lead the line, while the backline shone again as Diego Godin marshalled his men well with Rodrigo Betancur also deserving of a mention after a stellar display in midfield.

As for Portugal, Cristiano Ronaldo scores highest as he tried to lead by example and added a touch of quality to their attacking play when involved, but it wasn’t enough for him to find a goal or to inspire his teammates to victory.

In truth, it was a disappointing display all-round from Portugal as they lacked any real quality in midfield to stamp their mark on the game. Although, Uruguay deserve credit for that too as they harassed and worked tirelessly off the ball to make life extremely difficult for Portugal to play their passing game.

Raphael Guerriero was arguably the most disappointing of the bunch, as Uruguay took advantage of the height mismatch for the opening goal, while his distribution was poor throughout.

Uruguay will now go on to meet France in the quarter-finals, while for Ronaldo and Portugal, they will have to assess their failure to add the World Cup to the European crown that they won two years ago.