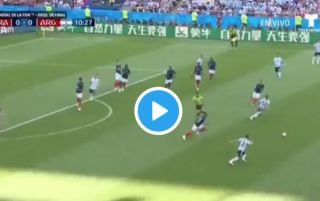 Kylian Mbappe absolutely wowed fans this afternoon, after the 19-year-old showed an absolutely insane burst of pace to beat Argentina’s defence and win a penalty for France.

The forward, who plays his club football for PSG, had fans on their feet as he took on a whole host of Argentina stars on his way to winning a spot-kick for his side.

The PSG star has been a huge threat for Les Blues so far this match, and is often used an easy way for his side to forward down the right hand side and cause trouble for the Argentina side.

Here’s a clip of the youngster’s insane turn of pace to make a mockery of the Argentina midfield and defence this afternoon.

What a superstar of a player he’s going to be in the future. We can’t wait!