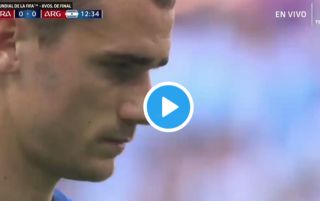 Antoine Griezmann put France 1-0 up against Argentina from the penalty stop this afternoon, after Kylian Mbappe’s insane run drew a foul from Marcos Rojo.

The Atletico Madrid forward bagged his second goal, and second penalty of the tournament, this afternoon, after he cooly and collectedly slotted the ball home from the spot early in the first half.

The goal now means that Argentina and Lionel Messi have it all to do if they are to reach the quarter finals of this summer’s World Cup.

The penalty was won by Kylian Mbappe, who set off from half way inside his own half before drawing a foul just inside the box from Man United ace Rojo.

Here’s a clip of Griezmann’s penalty that has put Les Blues in a great position to advance to the quarter finals for the second consecutive tournament.

We knew Griezmann was good, but we didn’t realise he had penalties in his arsenal as well. What a player!