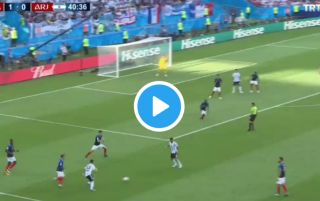 Angel Di Maria bagged one of the goals of the tournament this afternoon, as the PSG star scored an absolute thunderbolt to draw his side level against France.

The former Real Madrid star equalised for Argentina, as the midfielder scored an absolute fantastic strike from a good 30 yards to to peg the French back just before half time.

There haven’t been many truly stunning goals so far this tournament, so this strike from Di Maria is almost certainly going to be in contention for winning the award for goal of the tournament come the end of the World Cup.

Here’s a clip of Di Maria’s superb strike against France, one that would deserve to win any game, let alone draw your side level!

We knew he had it in his locker, but to produce it on a stage like the World Cup? Fair play to the lad.

Electric strike from Angel Di Maria to level the score!! ??

DI MARIA!!!! What an insane shot! All tied up!!!! #argentina #worldcup pic.twitter.com/LzLpI04TMS