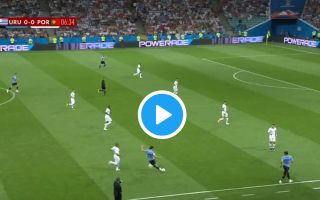 Uruguay got off to the perfect start against Portugal as Edinson Cavani handed them the lead after just seven minutes following some excellent build-up play.

Given how defensively sound Oscar Tabarez’s side have been throughout the tournament thus far as they have yet to concede a goal, the last thing Portugal wanted was to fall behind to them.

Unfortunately for Fernando Santos and his men, that’s exactly what happened and as seen in the video below, it was some wonderful combination play between Cavani and Luis Suarez which unlocked their defence.

The pair have been playing together for the Uruguayan national team for years, and it certainly showed in this goal as they played a cross-field one-two as Suarez’s delivery into the box was perfectly placed into the path of Cavani who got onto the end of it and diverted it into the back of the net past Rui Patricio.

The Paris Saint-Germain forward endured a frustrating start to the World Cup, but after netting late on in the win over Russia in the final group game, he appears to have found his goalscoring touch despite not always playing as the lead forward in the side.

GOAL! Sensational one-two. Cavani swings a crossfield ball out to Suarez on the left who returns the favour with a whipped delivery to the back post for Cavani, to power in a header pic.twitter.com/zRb3TVNbOC

Cavani to Suarez, Suarez to Cavani! Best one-two in the history of the World Cup? pic.twitter.com/hOF1EpToJP