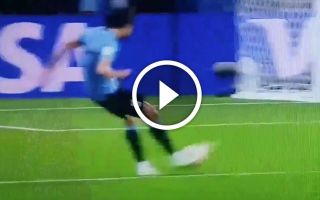 Minutes after Pepe had drawn Portugal level against Uruguay, Edinson Cavani produced a moment of magic to restore his side’s lead in their World Cup clash.

The Paris Saint-Germain forward had given his side an early lead after some excellent build-up play with Luis Suarez, but Pepe headed home an equaliser in the second half to set up a thrilling finish.

That seemed to galvanise Portugal who began to play at a higher tempo and played with more intensity, but just as they started to threaten and look for another goal to take the lead, Cavani struck again.

After a frustrating start to the tournament, the 31-year-old is undoubtedly starting to find his goalscoring touch and his confidence is seemingly sky high as he took this shot on first time and curled a brilliant shot round Rui Patricio and into the back of the net, as seen below.

Unfortunately for Cavani and Uruguay, he was forced to limped out of the game shortly after with an injury problem, but he’d certainly played his part before leaving the game with a crucial double.

Off the back of a campaign in which he scored 40 goals in 48 games for the French champions, the prolific forward showed his class when Uruguay needed him.

GOAL! Bentancur surges through the midfield lays off Cavani on the left who finesses a first time curling shot inside the post pic.twitter.com/RnpmMcJcfP

I love you Cavani! Wow! pic.twitter.com/dpCJJ0bGc1