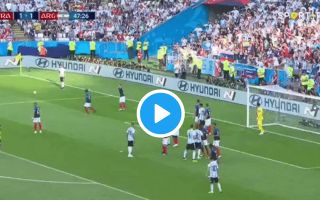 Argentina fell behind early on in their last-16 clash with France via an Antoine Griezmann penalty, but to their credit they fought back to keep their World Cup hopes alive.

France looked dangerous in the opening stages, finding pockets of space between the lines to carve open opportunities as Argentina looked vulnerable at the back as they have done throughout the tournament.

However, they received a huge boost just before half-time as Angel Di Maria scored with a sensational long-range strike, before Gabriel Mercado turned things around early in the second half.

The 31-year-old managed to divert Lionel Messi’s strike into the back of the net, leaving France goalkeeper Hugo Lloris wrong-footed, although it’s questionable as to whether it was deliberate or if he was merely just trying to get his foot out the way.

Argentina won’t be complaining though, as they’ll hope to kick on from being on the brink of elimination to continue their World Cup journey.