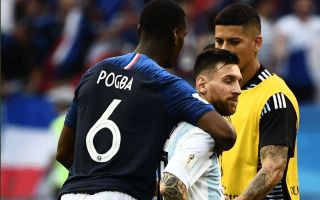 Argentina were eliminated from the 2018 World Cup by France on Saturday, and question marks will be raised over whether or not Lionel Messi will feature in another.

At 31, the Barcelona superstar will perhaps still have the motivation to feature again in four years time, but much will depend on his form, fitness and desire to try again.

In turn, there is a possibility that the 4-3 defeat to France was his last appearance at a World Cup, and Manchester United midfielder Paul Pogba has shown real class by lavishing praise on the Argentine talisman for his impact on football and him personally.

“When you play against the best football of the last ten years, I watch and learn from him. Messi makes me love football. He will always be my idol,” he said as seen in the video below, and as quoted in the tweets below.

Having scored 45 goals and provided 18 assists in 54 appearances for Barcelona last season, it’s evident that Messi still has plenty left in the tank to perform at the highest level.

Nevertheless, four years is a long time to maintain that level to not only ensure he deserves a call-up but also to stay clear of injuries in the latter stages of his career. Further, it hasn’t ever really clicked for the Barca icon at international level, and so time will tell if he is to come back for another go.

For now though, Pogba’s tribute would presumably sum up the way a lot of fans and fellow players feel about Messi…

Paul Pogba on Messi: “We’ve played against the best player in the world. I’ve been watching him for 10 years to learn from him, he makes me love football. He’s always going to be an idol for me.”
pic.twitter.com/DYEqoabr5T

Pogba: “When you play against the best footballer of the last ten years, I watch and learn from him. Messi makes me love football. He will always be my idol.”

Paul Pogba consoles Lionel Messi with a hug after France beat Argentina, knocking them out of what may well be Messi’s final World Cup. #MUFC #FRA #WorldCup #FRAARG pic.twitter.com/iPex9KVwjH

Pogba consoling and hug Messi after the game. pic.twitter.com/jmLCSUjexF