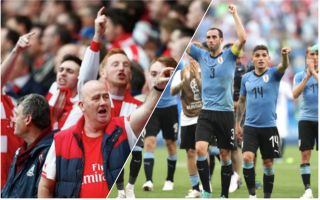 Arsenal fans seem to be getting restless about their club’s potential signing of Lucas Perreira after the player put in a man of the match-level performance to help Uruguay beat Portugal on Saturday.

The Sampdoria star is reportedly set to sign with the north London club next week as per the Daily Mail, with is also being reported that the club need to finalise negotiations for the midfielder.

The midfielder put in a stunning performance for Uruguay against Portugal in the World Cup round of 16 on Saturday, one that helped his side beat Ronaldo and Co 2-1, meaning they will now take on France in the quarter finals.

Here are a few select tweets from fans calling the Gunners to get a deal for the player over the line, and judging by his display yesterday, we can understand why they’re restless!

Oh Torreira, I’m afraid some big spenders would hijack the deal from @Arsenal. If sampdoria already agreed, only personal terms can spoil the party I guess. @Arsenal don’t Arsene this deal! Give him what he wants please!

This needs to get confirmed asap, come on @Arsenal announce #Torreira! https://t.co/GlDv6V470I

@Arsenal announce Torreira or we riot

Dear Arsenal fans – If we have not closed the #Torreira deal by now, we are not closing it.. Move on. Don't waste your time cheering for Uruguay!!!

Arsenal need to get this Torreira deal done pronto

Pretty worried that after all these Torreira performances, someone sweeps in with a 50m offer and steals the deal…

Been very impressed with Torreira this game. I’m worried if Uruguay go far more clubs will be interested in him and we’ll lose out…

Genuinely worried somebody will hijack the Torreira deal