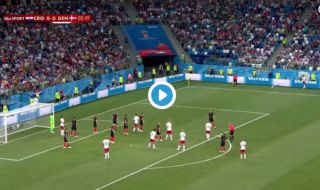 It was 1-1 after just four minutes in the Croatia vs Denmark World Cup clash this evening.

These two sides are scrapping it out for a World Cup quarter-final place, with Croatia really impressing at the tournament so far.

However, their defending was sloppy as they went behind after just a minute here…

GOAL! Knudsen's long throw into the box wreaks havoc. The ball finds its way through to Jorgensen at the back post whose stab at goal squirms under Subasic pic.twitter.com/eRS8KubzJz

With so many goals and so much drama, is this already one of the best World Cups of recent times?

GOAL ?? Immediate response as @MarioMandzukic9 fires Croatia level! We could be in for a goalfest here ?