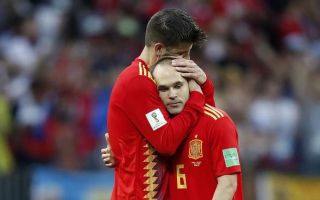 After a glittering career with Spain which brought him two European Championships and a World Cup, Andres Iniesta has bid farewell to La Roja.

The 34-year-old left Barcelona at the end of last season after an incredible spell with the Catalan giants, and he has now closed another chapter in his career.

A fundamental piece in the brilliant side that dominated the international stage between 2008 and 2012, Iniesta was a key cog in what made Spain so effective. With his influence beginning to wane, it was a contributing factor in their early World Cup exit this summer, particularly in their disappointing display against hosts Russia.

However, they’ll now have to find an answer to the problem in the long-term as Iniesta will no longer be around, as confirmed in his emotional farewell message seen in his tweet below.

It will have been a difficult couple of months for the stalwart as he has looked visibly upset both after confirming his Barcelona departure and following Spain’s exit from the World Cup.

Now though, he’ll concentrate on a successful end to his career with Vissel Kobe in Japan, with this message encompassing the class and passion that he has shown both on and off the pitch throughout his illustrious career.