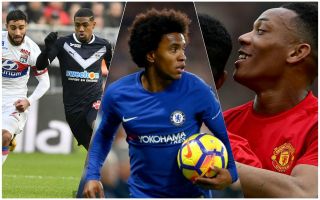 Linked with Chelsea by the Evening Standard among others, Anthony Martial has struggled at Manchester United and could do with a change of club in order to play more and get the chance to escape Jose Mourinho and express himself.

Martial and Mourinho certainly don’t seem an ideal fit, so if Willian leaves Chelsea this seems an ideal opportunity for the Frenchman to start afresh in the Premier League.

The 22-year-old has also been linked by the Daily Star with Bayern Munich, suggesting he’d cost around £70million.

Anthony Martial has been linked as a transfer target for Chelsea

That Evening Standard piece also mentions interest in exciting young Bayer Leverkusen winger Leon Bailey, who will surely be on his way to a bigger club before too long.

The Jamaica international is a superbly skilful and entertaining attacker, and would surely fit in well alongside similar players like Eden Hazard at Chelsea.

It remains to be seen how much of a priority he is, but Bailey would be well worth looking at if Willian does make the move to Barcelona.