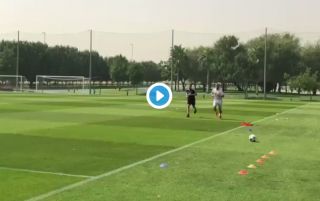 Manchester United left-back Luke Shaw sent something of a message to his manager Jose Mourinho with a video of himself back early for pre-season training.

The England international, who didn’t make Gareth Southgate’s World Cup squad this summer, has not had the easiest of times at Old Trafford but is clearly determined to get off to the best possible start ahead of the new season.

Shaw has had his run-ins with Mourinho, who has been publicly critical of his fitness and general performances on a number of occasions.

This video posted to Shaw’s Instagram, and tweeted by Twitter account United Xtra, shows the 22-year-old has the right approach to getting in his manager’s good books.

‘The way he trains, the way he commits, the focus, the ambition, I cannot compare (to Young, Darmian and Blind). He’s a long way behind,’ the Portuguese was quoted by Joe last season.

The Guardian also reported last year that Shaw was convinced his United career was over due to his poor relationship with Mourinho.

Fans will hope a proper pre-season and better luck with injuries can see this be Shaw’s best season in a United shirt, though Mourinho will also have to give him the chance to play…