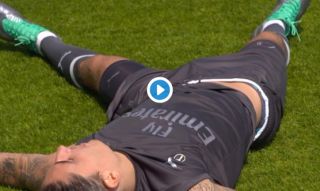 Arsenal fans will be pleased to see they are now getting a little more behind-the-scenes access to training at the club now under their new manager.

Arsene Wenger was notoriously private about such matters, but the Gunners now seem to be prepared to give fans a look at more goings-on on the training pitch under new boss Unai Emery.

The Spaniard was unveiled by Arsenal at the end of May and has just started pre-season training with his players not involved at this summer’s World Cup.

Upon joining, Emery promised he would get his team to work hard, which has been a cornerstone of his philosophy in previous jobs.

‘I don’t promise we will win but I can promise you we will work hard, work together,’ Emery was quoted by the Daily Mirror in his first press conference.

It was often felt Arsenal didn’t work hard enough under Wenger, so fans will be glad to see their players currently look exhausted by Emery’s training sessions!