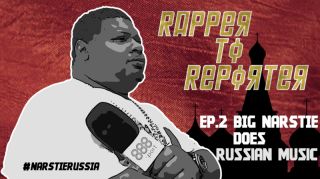 It’s the latest part in Big Narstie’s quest to turn himself from Rapper to Reporter after he became sick and tired of the same predictable football punditry.

With the help of Russian Tornado, the grime artist educated himself with a bit more knowledge of Russian culture while using his own musical talents to strike up a rapport with the trio.

After finding his flow and getting the timing on point, Big Narstie and his latest collaborators came up with some excellent results as he continues to his journey having now ticked another box off.

Across another five episodes, Big Narstie is continuing to Take ‘Em On and change the game in a seven-part journey he hopes will land him a reporting gig on the world’s biggest sporting stage.

Based on the success of the first two episodes, we can only presume there will be more memorable moments to come!