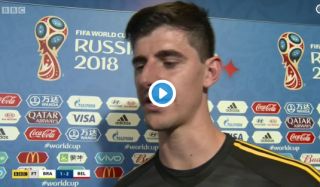 Chelsea goalkeeper Thibaut Courtois has gone out of his way to send a message to fellow ‘keeper Jordan Pickford.

The Belgium international spoke after his country’s stunning World Cup victory over Brazil tonight and was keen to put to bed any speculation that he’d mocked Pickford over his height.

Courtois insists his words had been taken out of context and he wanted to make it very clear he would never look to make fun of a fellow professional.

The Blues ace put in a superb display for Belgium tonight, including a stunning save from Neymar late on.

Pickford, meanwhile, was England’s hero against Colombia and will be hoping to book a semi-final place as well as England take on Sweden tomorrow.

Video: ‘He’ll be out for the best part of seven/eight months’ – Early indication is Liverpool’s Van Dijk could miss season October 17, 2020 19:05
Liverpool FC