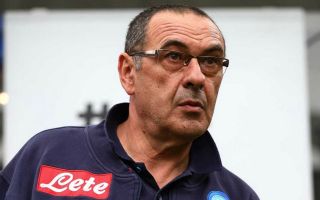 Amid ongoing speculation linking Maurizio Sarri with the Chelsea job, Gianfranco Zola has insisted that there is one key aspect to the club’s potential appointment.

As noted by The Express, the former Napoli boss is supposedly edging ever closer to landing the job at Stamford Bridge, with the Blues set to replace Antonio Conte.

After guiding Chelsea to the Premier League title in his first season in charge, Conte followed that up with the FA Cup last year. However, after failing to qualify for the Champions League, it has raised question marks about his position at the club it seems.

Zola, who has been linked with a position at his former club if Sarri arrives, as per Sky Sports, has warned Chelsea that in order to get the best out of his compatriot and the most productive results, they have to let the Italian tactician do his job with the team.

“I would hope that, should Sarri move to London, they will let him do his job, which means planning and organisation leading to constant improvement in the players,” he told Calciomercato, as quoted by Sky Sport Italia.

“I hope he can achieve the same results as previously; it’s certainly a very different challenge and a different situation compared to where he’s been before, but one with lots of advantages. We’re talking about an exceptionally quality coach, who will have the chance of doing a great job.”

Sarri’s previous results are there to see after successful stints with Empoli and Napoli, as although he hasn’t landed the silverware that he will undoubtedly crave, he has transformed both clubs in terms of style of play and taking the latter to within touching distance of ending the dominance of Juventus in Serie A.

Given Conte’s more pragmatic and defensive approach, it will be quite the transformation should Sarri take charge, but Zola is rightly adamant that he needs to be given the confidence and space to do his job effectively, provided he does land the job.