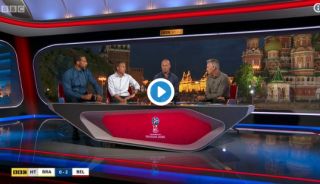 Manchester United legend Rio Ferdinand has heaped praise on Marouane Fellaini as he’s been immense on the pitch for Belgium against Brazil tonight.

The 30-year-old only recently signed a new contract at Old Trafford after his future had come into some doubt as he ran down his previous deal.

Now set to stay at United, fans can be very pleased with how Fellaini is performing at this World Cup as Ferdinand highlights him as key to Belgium’s strong first half.

The former England international described the big Belgian as a ‘monster’ in midfield for Roberto Martinez’s side, who could now be heading for the semi-finals of the World Cup.

Fellaini has been a "monster" in midfield, says @rioferdy5. #bbcworldcup pic.twitter.com/5hKYWcj3z7