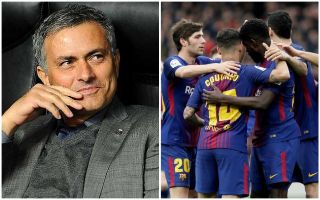 Jose Mourinho is reportedly keen for Manchester United to target Barcelona star Jordi Alba as their new left-back in this summer’s transfer window.

The Red Devils could certainly do with a specialist in that position as an upgrade on Ashley Young and Luke Shaw, and Mourinho is keen on Alba, according to Don Balon.

The Spain international has certainly been a consistent performer and one of the very best full-backs in Europe for the last few years, and would be a fine signing for United.

However, it is hard to imagine Barcelona would be too keen to sell him any time soon, and they’ll be under little pressure to do so unless they receive a huge sum of money from the Red Devils.

Barca’s official site has Alba’s release clause at a whopping £132million, which is surely too much to spend on any full-back, no matter how good.

The 29-year-old may also have his own reservations about moving to this United side, which failed to win a trophy under Mourinho last season whilst playing some uninspiring football that would be some culture shock after moving from Barcelona.