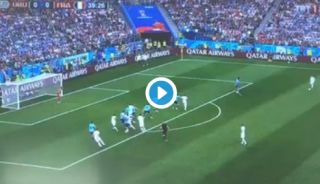 France took a 1-0 lead against Uruguay in today’s World Cup quarter-final thanks to a fine glancing header from Real Madrid defender Raphael Varane.

Scoring just his third goal for France, the 25-year-old showed superb instincts in the box to pounce on a lovely set-piece delivery from Atletico Madrid’s Antoine Griezmann.

MORE: Video: Hugo Lloris got something nasty in his mouth ahead of France vs Uruguay clash

It hasn’t been the most convincing start from either side so far, but France have the edge over Uruguay for the moment thanks to this well-worked goal below:

GOAL! Varane heads France into the lead with their first effort on target! pic.twitter.com/O1loZxJRWa