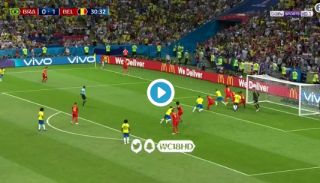 Kevin De Bruyne has scored a stunner to make it 2-0 to Belgium against Brazil in tonight’s World Cup quarter-final.

The Manchester City star rifled in a low and powerful effort as Belgium put together a wonderful counter attack following a Brazil corner.

Much of the credit must go to Manchester United striker Romelu Lukaku, however, who is causing Brazil no end of problems tonight and who set up the strike superbly.

Using his pace and power to break through the midfield, Lukaku then displayed the intelligence and composure to pick out De Bruyne, who made no mistake.

This goal video, with sublime football from the Belgians, really has to be seen: