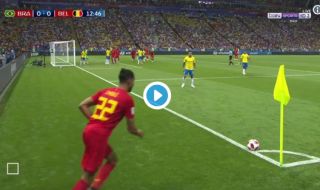 Belgium took an early lead against Brazil in the World Cup quarter-final this evening thanks to an own goal by Manchester City ace Fernandinho.

Nacer Chadli, who struck Belgium’s winner against Japan in the last round, swung in the corner that was bundled into his own net by Fernandinho.

MORE: Video: Hugo Lloris produces save of the World Cup for France to keep Uruguay out

Belgium have long been talked about as dark horses in major international tournaments, but have so far failed to live up to the hype.

Could this finally be their year as they edge into a lead against such a big name to have one foot in the World Cup semi-finals?

GOAL ?? @VincentKompany attacked the near post but it was @fernandinho who steered it into his own net! #BEL lead!