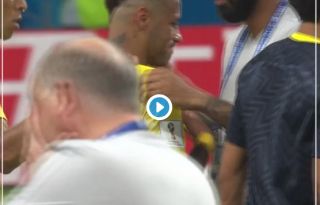 Belgium earned a famous 2-1 victory over the five-time winners this evening, with an own goal from Fernandinho and a sublime strike by Kevin De Bruyne doing the job.

Neymar did not have his best game after a frustrating tournament with Brazil, and it’s clear he was devastated afterwards.

So many top players crave the chance to shine on this big stage, with most of the game’s biggest legends held in higher esteem if they did the business at a World Cup.

It hasn’t really happened for Neymar so far but Hazard and Henry showed their class to comfort him at full time, despite some unsavoury diving antics throughout the game.