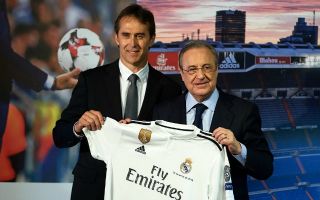 According to Don Balon, the Colombia international wants to return to Madrid from his loan at Bayern Munich after the appointment of their new manager Niko Kovac.

While Perez seems ready to bring Rodriguez back to the Bernabeu, he does not feature in the plans of new manager Lopetegui, according to Don Balon.

MORE: The real reason Antonio Conte was nowhere to be seen at Chelsea training ground

It remains to be seen how this disagreement will pan out, but Arsenal and Chelsea may want to keep an eye on the situation following recent links with the player.

Don Balon have previously mentioned the two London giants as admirers of Rodriguez, and it’s clear both clubs could benefit from having the 26-year-old on their books.

Arsenal lost Alexis Sanchez and Theo Walcott in attacking midfield in January, and Rodriguez could add depth in that area and take the pressure off Mesut Ozil to provide all the creativity from the middle.

Chelsea, meanwhile, may also benefit from having Rodriguez at the club as they urgently need to recruit some big names after a flurry of poor midfield signings last summer.

Rodriguez could play a deeper role at Chelsea and provide a far better option than the likes of Tiemoue Bakayoko, Danny Drinkwater and Ross Barkley.

Still, if Perez wants Rodriguez back at Real it seems likely the president will have the final say on this decision, though of course it could be more financially beneficial to cash in on him now if Lopetegui has no plans to use him as Don Balon suggests.