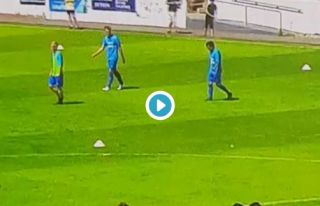 A Liverpool fan has spotted another bad goalkeeping error from Loris Karius after he had a nightmare in May’s Champions League final loss to Real Madrid.

On that day the German shot-stopper threw the ball against Karim Benzema for Real to score the opener, and then parried a long-range Gareth Bale effort into his own net for the third.

Training in the background in this video clip below, Karius can be seen once again letting a simple shot go through his hands in what is undoubtedly a worrying moment as far as LFC fans are concerned.

Watching the match build up. Take a look at #Karius in the background. #OhForFuckSake #LFC pic.twitter.com/N88ztj5m6z

Following that Champions League final loss, Jurgen Klopp blamed Karius’ errors that day on concussion after a clash with Sergio Ramos, as reported by ESPN and others.

Guess he got concussion again today as Liverpool beat Chester in a pre-season friendly, which is pretty unlucky really…

Either that or he’s not a great goalkeeper…? You decide.