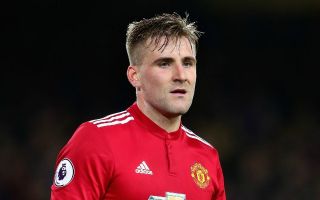 Luke Shaw may not be part of the England squad this summer, but the Manchester United left-back enjoyed Gareth Southgate’s side reaching the World Cup semi-final today as much as anybody.

That is, at least, until he made the mistake of tweeting about the heroics of England goalkeeper Jordan Pickford after the game, by asking the internet to provide him with some entertainment.

Shaw put it to his Twitter followers to reply with things Pickford could save in accompanied by a relevant hash tag, but one fan absolutely owned him with his short but brutal response:

Your career at Manchester United.

It’s fair to say Shaw hasn’t had the best of times at Old Trafford since joining in 2014, with injury disrupting his progress and manager Jose Mourinho not giving him much in the way of opportunities since his return.

Could Pickford save the 23-year-old’s career? To be honest, that might be a stretch even for the excellent Three Lions shot-stopper.