Chelsea ace David Luiz was blighted by injury woes last season, but he’s reported for pre-season training and is seemingly focused on the campaign ahead at Stamford Bridge.

The 31-year-old was limited to just 17 appearances last season, and now seemingly faces a battle to claim a starting berth back with Andreas Christensen settling into the Blues backline.

SEE MORE: The real reason Antonio Conte was nowhere to be seen at Chelsea training ground

Nevertheless, the priority for the Brazilian ace will be to regain full fitness and prove his worth to current Chelsea boss Antonio Conte, making it difficult for the Italian tactician to leave him out.

After their underwhelming campaign last year, the Premier League giants will feature in the Europe League next season. In turn, Conte will need a deep squad to compete on multiple fronts, and so that does open the door for Luiz to potentially play a prominent role next season.

It appears as though he isn’t interested in exit talk either, as noted in the image below taken from his Instagram stories, as he laughed off rumours linking him with a move to Porto, bitter rivals of his former club Benfica. 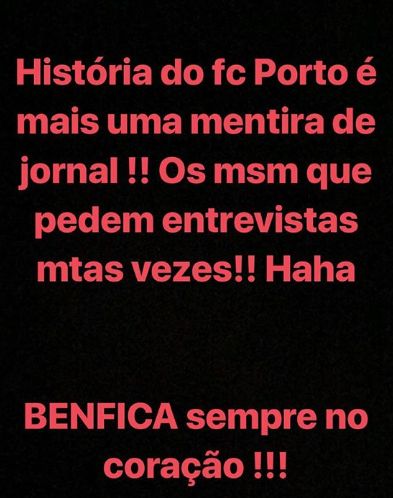 “The history of FC Porto is more of a newspaper lie, the same ones that ask for interviews many times !! Haha. BENFICA always in the heart !!!”

While that dismisses a possible move to Porto, it remains to be seen whether or not Luiz isn’t shipped out elsewhere and is willing to move on to secure a prominent role.

Based on his other Instagram activity on Saturday, as seen in his post below, it appears as though he’s relishing being back in pre-season training with Chelsea and time will tell if he can prove to be an influential figure at Stamford Bridge again by impressing Conte ahead of the new campaign.

As noted by The Sun, there were reports of issues between the pair last season, and so it remains to be seen if they have put those behind them to start fresh this summer.